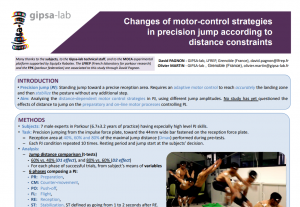 INTRODUCTION
• Precision jump (PJ): Standing jump toward a precise reception area. Requires an adaptive motor control to reach accurately the landing zone and then stabilize the posture without any additional step.
• Aim: Analyzing the distance-dependent motor control strategies in PJ, using different jump amplitudes. No study has yet questioned the effects of distance to jump on the preparatory and on-line motor processes controlling PJ.

CONCLUSION
• Preparation: Getting from 60% to 80% of Dmax perceived as a major difficulty by the neuro-motor control system, so it switches to a more predictive strategy expressed by longer preparation times helping to calibrate the PJ.
• Counter-movement to reception: Getting from 40% to 60% of Dmax involves an increase of iEMGs during push-off, as well as a stronger impulse and a more grazing trajectory. Conversely, getting from 60% to 80% of Dmax shows that an increases of iEMGs no longer leads to significant changes in impulse forces. Push-off resources have reached their limits so another mode of energy generation takes over, expressed in the stronger counter-movement generating pliometric force, and in the different onsets and actuations of motor.
• Stabilization: Getting from 60% to 80% of Dmax makes the flight long enough for on-line computations. Moreover, the time of flight is not as increased as in the condition result since the subject extends himself in order to damp more and to get an anticipated proprioceptive feedback. As a consequence, there is no further decrease of success rate.